Inflation at The Wall Street Journal 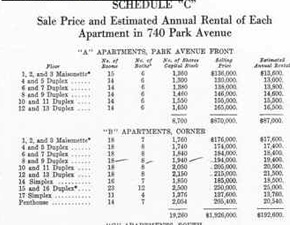 In late August, the real estate column in the Wall Street Journal (locked behind a firewall, so no link, sorry!) ran a notable sentence about the subject of my penultimate book, 740 Park. It was notable because in a mere twenty words, it contained five errors. As the self-appointed guardian of 740 facts, I penned what I hoped was a wry note (inspired by the one John Lennon wrote to Queen Elizabeth when he returned his MBE to the British Crown “in protest against Britain’s involvement in the Nigeria-Biafra thing, against our support of America in Vietnam, and against ‘Cold Turkey’ slipping down the charts”) pointing out the mistakes and expressed a preference that it run as a letter to the editor rather than a correction since, as a former reporter myself, I know how much they hate corrections — and, being thoroughly shameless when selling a new book, I hoped to get Rogues’ Gallery mentioned. But the WSJ is holding firm. “Because my sources won’t contradict the descriptions I’d written, we won’t write it up as a correction,” columnist Sara Lin informs me. So just to set the record straight, here’s that letter:

To The Editor: If repetition by Nexis and Factiva was a firm guarantor of truth, Sara Lin’s latest Private Properties column referencing Stephen Schwarzman would have been beyond reproach, but instead, I fear, it is riddled with errors. Lin writes that the Blackstone boss “owns a 20,000-square-foot triplex apartment at 740 Park Ave. in Manhattan, for which he paid $38 million in 2001.” To give your reporter her due, she got the address right. As the Wall Street Journal has never deigned to take note of my 2005 book 740 Park (let alone my current Rogues’ Gallery, about the wealthy patrons of the Metropolitan Museum of Art), perhaps her errors are unsurprising, but most readers are well aware of and most reviewers (and real estate professionals) have praised the book for its accuracy, so using it as my reliable source, I would note that the apartment (as opposed to the cooperative corporation shares, which were previously owned by George Brewster, John D. Rockefeller Jr. and Saul Steinberg) is a duplex occupying a portion of the building’s 15th and 16th floors with a servants’ mezzanine between floors — not a triplex; that it is somewhat larger than 20,000 square feet (although its exact dimensions, like those of most cooperative apartments in New York City, have never been given); that it changed hands early in 2000, not in 2001, and that Schwarzman paid about $30 million (according to my source, a member of the building’s co-op board), not the oft-mentioned, but seriously inflated figures of $37 million or $38 million. If Ms. Lin would like to avoid such mistakes in future, I suggest she buy a copy of the book, which is still available in most bookstores. Better yet, she could review it — and get a freebie. Better late than never.
Sincerely,
Michael Gross