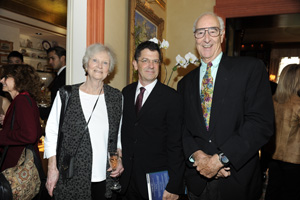 Tom Hoving, the outsized, ebullient, always controversial leader of the Metropolitan Museum of Art, who revolutionized museums around the world in the decade from 1966 to 1976, died this morning after a short bout with cancer first diagnosed late this spring. Hoving, who was also a scholar, curator, commissioner of parks in New York City, bestselling author, magazine editor, raconteur, and perennial thorn in the side of the museum mafia, described his condition with typical candor. “I’m a goner,” he told me in July. “But I have no regrets. I’ve had a terrific life.”

In the days just before his death, his long-time antagonists in the administration of the museum “buried the hatchet” with him, says his friend and colleague Daniel Herrick, the Met’s former chief financial officer. Philippe de Montebello, who Hoving chose and groomed as his successor, later became an open and bitter enemy. But he “stepped up to the plate” and wrote his former boss a conciliatory letter. And the museum may be the site of a future memorial, Herrick said as Hoving approached death at home in New York, his wife Nancy (above with her husband and me at the Rogues’ Gallery launch party in May) at his side. Even his enemies can agree that Hoving was never, ever boring. It will be fascinating to see how he is mourned after decades as the target of “official” disdain. It could be a spectacle worthy of the great showman himself.

Hoving wrote to me last spring, defending his reputation against an Amazon customer reviewer of Rogues’ Gallery — and summed up his career succinctly. “I may have ‘floundered badly’ (while running the Met and afterward) but being the editor-in-chief of Connoisseur magazine, arts editor of 20/20, writing fifteen books of which two were national bestsellers and now a TV personality on artnet.com (‘My Eye’ every two weeks in the Magazine) is a helluva way to flounder.” The city of New York and the museum world will be far less fun without him.
UPDATE: News of Hoving’s death quickly spread across the web. And my inbox filled with touching tributes to him. Some of my favorites: “He was a remarkable guy, full of life and humor, a little crazy like the very best of us,” said a child of a former Met president. Added a former Met curator: “What sad news. Tom’s fingerprints are on every aspect of the Met that is progressive and admirable. What PdM [Philippe de Montebello] conserved, Tom largely created.” And finally (for now) this, from a relative of Hoving’s: “He leaves a gaping hole… his energy was so expansive.”