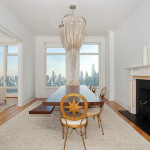 The New York Observer’s Kim Velsey reports that Deutsche Bank’s Michael Lewis has sold his three-bedroom apartment at the Limestone Jesus for $25.92 million, well under his $29.99 million asking price. The Observer tentatively identifies the buyer as Asian private equity mogul Michael Kim. With the sale complete, I think it can be revealed that Alex Gibney filmed his interview with me for his film Park Avenue, based on 740 Park, in Lewis’s dining room (shown), and the setting sun view over my shoulder throughout is the one Lewis family enjoyed on a nightly basis.