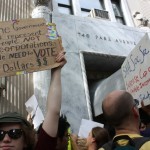 Curbed reports that Len Blavatnik, who left the Soviet Union in 1978 but still profited from its collapse via a partnership with Russian oligarch Vikor Vekselberg, has set a new New York co-op sales record with his $77.5 million purchase of New York Jets Woody Johnson‘s 14 room duplex at 834 Fifth Avenue. The previous record holder was 740 Park, where hedgie Israel “Izzy” Englander bought a second apartment in September for $71.3 million. 740, of course, had held that record previously, thanks to private equity poobah Steve Schwarzman‘s 1999 $29.9 million purchase of what had been Saul Steinberg’s duplex there. Indeed, Schwarzman held that record when Blavatnick tried to buy an apartment at 740, and its board recruited oilman and right wing financier David Koch to snatch it away (“I took it out from under his nose,” Koch boasted in an interview for my book 740 Park). Last laugh: Blavatnik. At least until Schwarzman decides to sell.