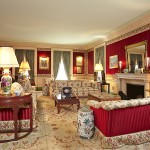 Plagued by bad press this summer due to a series of petty thefts (petty for them, at least), 740 Park is back in the news today thanks to the listing of its fourth floor D-line apartment by investment banking’s Peter Huang. The apartment was infamous when Huang was still married to his first wife, Nancy Stoddart, whose friends from the Studio 54 set often came to keep partying there after-hours. Priced at $29.5 million, the unit, which overlooks 71st Street, is likely a fixer-upper. So if you’re handy as well as wealthy, pounce! The listing belongs to Kyle Blackmon, famous for selling the $88 million penthouse at 15 Central Park West for Sandy nd Joan Weill. It’s Blackmon’s second coup this week: He’s one of the brokers selling an as of now imaginary $130 million mansion at River House. It’s currently (and apparently not for long) home to the veddy exclusive The River Club.