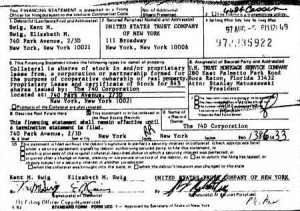 Elise Knutsen of the New York Observer reports that the paper has received a letter from Brown Harris Stevens,the management company for 740 Park Avenue, firmly denying a source’s contention last week that it or the building’s board had any knowledge that one of BHS’s owners, Kent Swig, had borrowed against his 740 apartment (now occuppied by his estranged wife, the former Elizabeth Macklowe). “The suggestion that Brown Harris Stevens would somehow violate the rules of a building it manages, and thus its fiduciary duties, in order to accommodate a principal is absolutely untrue and very damaging to Brown Harris Stevens’ nearly 140 year old sterling reputation,” the firm wrote, leaving no doubt it feels itself innocent. As the loan document above from August 1997 indicates, the rules of the building were violated, however, quite long ago, when 845 shares of the co-op corporation stock and the Swigs’ proprietary lease were pledged as collateral. So the mystery lingers. How did Swig manage to borrow against an apartment in the city’s premier all-cash building? Did the Board breach its duty? Did the banks that loaned to the Swigs neglect to get Board recognition agreements? Inquiring cooperators want to know!