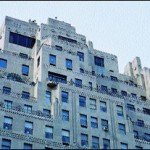 Yesterday’s revelation of a series of jewel heists at 740 Park led to a series of followups today in the New York Post and on CNN, among other outlets. You can watch the CNN video here. The Post reveals that the victims include Danielle Ganek, whose husband’s hedge fund “agreed to pay the feds more than $21.5 million for its role in an insider-trading scheme” and Lauren Merkin, whose husband Ezra “was charged with civil fraud for allegedly steering $2.4 billion in client money to Bernie Madoff.” The Post missed the fact that victim #3 was Caryl Englander, whose husband Israel, paid one of the largest fines in history to the SEC, but, before you start thinking this was revenge on the .01%, consider that victim #4, June Dyson, while certainly also mega-wealthy, is the 94-year-old widow of an underclass-certified good guy. Husband Charles was an original member of Richard Nixon’s enemies list. 740 Park may have lost its claim to be the world’s richest apartment building to 15 Central Park West, but it still packs in plenty of plutocrats.