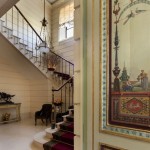 “I think it’s the biggest apartment in New York,” says a real estate aficionado of some standing. “It was the apotheosis of the ’80s,” when Salomon Brothers head and one-time “King of Wall Street” John and Susan Gutfreund bought a duplex at 834 Fifth Avenue for the then-staggering sum of $7 million. Yesterday, in the wake her husband’s death in March, Mrs. Gutfreund listed the extravagant twenty-room, seven-bedroom apartment for an even more astonishing $120 million. That’s quite a leap from the $275,000 Carl J. Schmidlapp, a vice-president of of the Chase National Bank, paid in 1930 for what was then a twenty-four room home in the Rosario Candela-designed cooperative then under construction on the north corner of Fifth and Sixty-fourth Street. Schmidlapp had structural steel that had already been erected moved to make way for a grand staircase (pictured) connecting his two floors–and lived there until his death in 1960. His widow lived on in the apartment until 1967 and after her death, it was taken over by J. Watson and Josephine Blair, she a member of the esteemed Cutting family, and he a J.P. Morgan banker, who hired Jansen to decorate. Though the building was best known as the home of Rockefellers, it also contained the duplex once owned by Jessie Woolworth Donahue and later New York Jets owner Woody Johnson, that sold last year for $77.5 million to the Ukranian-born billionaire Len Blavatnik. Once famously spurned by the notoriously picky board at 740 Park Avenue, Blavatnik got his revenge when he scored not only an 834 duplex, but the record for highest price ever paid for a New York coop apartment. The Gutfreunds got their even bigger and better home in 1986 “after Susan was adopted as the protege of Jayne Wrightsman,” the city’s social empress, says the aficionado, and Wrightsman insisted the Gutfreunds move from River House to Fifth Avenue, took them to 834 and introduced them to decorator Henri Samuel, who re-did the decor, “the best there was,” the source continues, “really sophisticated. It stood for something.” What will it stand for now? That depends on who is willing to pay the price to claim ownership of one of, if not the, best residences in the city–and whether 834’s board will accept them.