Her Body, But How Many Babies? 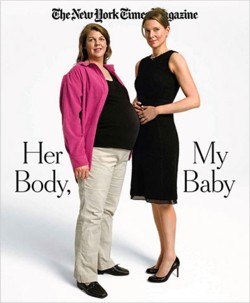 A mystery deepened at 740 Park this weekend when the prestigious co-op’s First Lady, Alex Kuczynski (above, right, aka amazon book critic Walter Winchell), published a piece about the birth of her first child via a surrogate. Oddly, the story mentioned neither recents reports that she and her fecund hedge fund husband, Charles Stevenson were divorcing, nor the one that had it that they are currently expecting another child, this one carried by Kuczynski. Inquiring minds await the latest Storkgram from 740 (Kuczynski’s last immaculate production was announced in the lead of the Liz Smith column). Such an announcement would certainly counter the often hilariously critical comments her piece inspired from New York Times magazine readers.
UPDATE: Of all the online reactions to Kucyznski’s confession, this one from a Salon commentor struck closest to the bone.