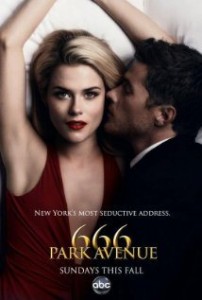 I never watched ABC’s supernatural soap opera 666 Park, and now it’s been cancelled, which makes me think I made the right choice. It was “shameless when it came to the inaccurate portrayal of Manhattan real estate,” Kim Velsey writes in her analysis of its failure in the New York Observer. But the real reason it’s died, she thinks, was “the erratic plot, the wooden acting, the lack of any sympathetic characters and for those who care about these kinds of things, the incoherence of the ‘evil’ plaguing the building.” So I wonder, if someone accurately dramatized the story 740 Park, wouldn’t it have an erratic plot and wooden, unsympathetic characters (hello, John Thain)? At least, the evil would be coherent, as Alex Gibney makes clear in his documentary inspired by the book. So maybe all that 666 needed and 740 needs is a great showrunner with a better idea than trying to copycat American Horror Story. With characters like John D. Rockefeller Jr., Saul Steinberg, Ronald Perelman, Ezra Merkin and even Alex Kuczyinski, a 740 series could do for Manhattan real estate what Law & Order did for our perps, police and prosecutors.