In the Belly of the Beast 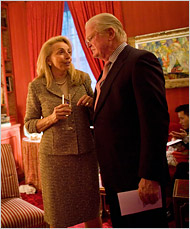 I got to this late but can’t resist. Last week’s Home section of the Times had a very funny story about a real estate marketing party at the Park Avenue maisonette of the late William F. and Pat Buckley, which has just come on the market. The Times captioned the photo above saying only that they were “guests” at the affair. That caption is worthy of expansion, for the two swells pictured are Michael and Eleanor Kennedy. He is the one-time radical lawyer who defended the likes of Huey Newton, Tim Leary, and the Weathermen. His presence in the apartment of the late great voice of conservatism is enough to make one’s head spin. The question is, left to right, or right to left??? (photo from nytimes.com)