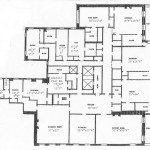 Hedgie Israel Englander‘s purchase of the French government’s duplex at 740 Park Avenue for a co-op-record-setting $71,277,500 hit public records over the weekend. Assuming he plans to combine his new palace with his existing one, a flight above, to create a massive triplex, Englander will likely top upstairs moneybags neighbor Stephen Schwarzman , and be able to claim ownership of the most impressive spread in the luxury building. Square footage in co-ops is difficult to compute, but his current fourteenth floor apartment (shown at left), one of the building’s few simplexes, which he’s owned since 2000, sprawls across 740’s entire Park Avenue front, while the former residence of the French UN ambassador sits just below in the corner ‘B’ line on the twelfth and thirteenth floors. The combined unit acccounted for 4,000 shares of the cooperative’s stock, while Schwarzman’s represents only 2,500 according to the original offering plan. Englander’s next door neighbor on twelve and thirteen is another financier, Howard Marks, whose combined apartments in the ‘C’ and ‘D’ lines are larger than Schwarzman’s but look out on East 71st Street. Marks holds ten more shares than Schwarzman, according to the offering plan. The building’s only other triplex, a penthouse on floors seventeen to nineteen, is considerably smaller and belongs to George David, the former head of United Technologies.