JUST IN: Who got Merkined at 740 Park 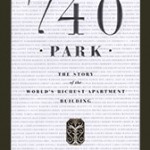 No word yet on how yesterday’s bonfire of 740 Park’s vanities started in Ezra Merkin‘s laundry room, but an inside source offers this who-else-got-hit report: Severe damage was suffered by Julia and David Koch, beneath Merkin, and Dana and Andrew Stone beneath the Kochs, “due to fire ‘n’ flooding. Heavy smoke inundated the homes of former 740 co-op board president Alice Tisch, above Merkin, and fashion’s Vera Wang, above Tisch and her husband. At least one of the victims is blaming building management and the super, and demanding a change. Meantime, security guards have been posted at all entrances and staircases, understandable considering 740’s recent history of what were reportedly “inside job” robberies. Is the so-called tower of power becoming the tower of woe?