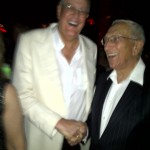 Via Bloomberg View, author William D. Cohan adds his voice to the chorus of condemnation aimed at billionaire Tea Party pal and 740 Park resident David Koch (shown greeting the late New Jersey Senator Frank Lautenberg at an obviously bipartisan 2010 party) in an essay titled “David Koch’s Chilling Effect on Public Television.” Cohan is commenting on The New Yorker’s recent revelation about attempts by public television executives to placate Koch over critical coverage–in Alex Gibney‘s documentary Park Avenue, based on 740 Park, and another film–and Cohan links those concerns to government snooping on phone calls and the Internet. “Just like that, in this insidious way — a film censored here, some phone records seized there,” Cohan writes, “the freedoms that we once took for granted and thought were guaranteed by our Constitution are slowly but surely eroded. This can’t be a good thing.” But apparently, it’s the real thing.