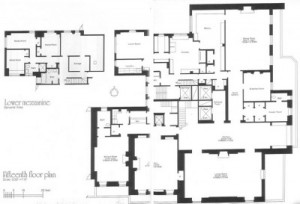 The late June and Randolph Speight’s apartment at 740 Park, aka 71 East 71st Street, is in contract reports Kim Velsey of the New York Observer, who got the news from the Olshan Luxury Report of weekly apartment sales. Velsey has some fun considering possible reasons for a $12 million price chop (tp $23 million) since the unit was first listed in the days before the collapse of Lehman Brothers, following Mrs. Speight’s death. Regardless, it’s a great estate sale. And now, let the speculation begin about who will sell next at 740 and whether it will ever retake the crown now held by 15 Central Park West for the most expensive apartment sale in the city. (One57 developer Gary Barnett would like to claim it, but he has to start closing on the sale of apartments there before he can–regardless of the overheated press he’s generated.) Attention Steve Schwartzman (part of whose floorplan is at right)! The ball’s in your double-duplexed court.