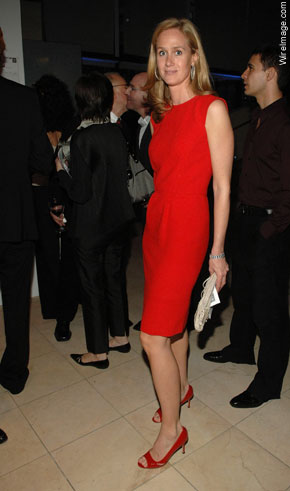 Those folks at 740 Park just don’t know when to stop. If this keeps up, I may have to write a sequel. In the latest episode of the slap-happy soap opera of the richest apartment building in the world, the owners of the triplex apartment built for Electra Havemeyer and Vanderbilt heir J. Watson Webb (and later occupied by Edgar Bronfman Sr. and Time-Warner founder Steve Ross, among others), are giving the world its latest peek at how the rich and shameless divorce. Former United Technologies chairman George David and his second spouse, Marie Douglas (above), an impossibly tall and quite winsome I-banking Swedish countess, are engaged in a spitball fight over their post-nup, with Marie demanding (sing along kiddies) More More More personal bailout funds — a figure that reportedly runs s high as $100 million. David, needless to say, is not letting go of his hard-earned bonus baby bucks so easily. So now, Marie has turned to that paragon of reasoned argument and calm negotiation, New York Post spitfire Andrea Peyser. Stay tuned for David’s counterpunch.