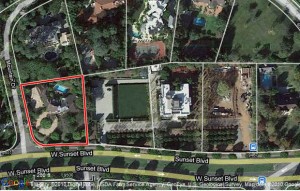 Here’s a little preview of my next book, a 740-Park-like look at the lives and real estate styles of Los Angeles’ wealthiest. Billionaires Lynda and Stewart Resnick have been much in the headlines lately. They financed a new Renzo Piano exhibition hall at LACMA, aka the Los Angeles County Museum of Art, and were feted at a major gala there last month. A few days later, the Federal Trade Commission and Food and Drug Administration accused them of hyping their POM pomegranate juice “as though they’re just a gang of cheap hucksters,” according to the Los Angeles Times. Unrevealed until now is what a source told me yesterday: that the Resnicks have just bought their fourth contiguous property on Sunset Boulevard in Beverly Hills. It’s the one outlined in red above. To the right are the other three parcels of what should probably be called Resnickland: their 1920s French chateau-style home flanked by two lots they previously purchased, razing the homes that were on them. Presumably, they plan to do the same to 630 Mountain Drive, which they bought on August 24th for $7,935,110. The 8,287 square foot two-bedroom two-story house on 1.05 acres with pool and three-car garage was built in 1952 (its only previous celebrity resident was the actor James Caan, who bought it in 1974 for a mere $225,000). Or maybe it will house the lawyers these major donors to the Democratic Party will need to fight for the right to make what the FTC deems “false and misleading” and “unsubstantiated” claims about Pom’s health benefits?