Whale of a Sale Sale 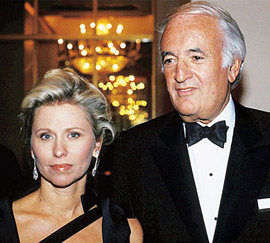 So… Max Abelson of the New York Observer reports that Courtney Sale-Ross‘s unofficial offer to sell her double duplex (Apt. 12-13 C/D) at the 71 East 71st Street entrance of 740 Park Avenue for $75 million — it was on the market, sort-of, and then off — is back on again. And he quotes the unlisted listing broker Edward Lee Cave asking “Who is Michael Gross?’ after Cave was told that Gripebox had reported the apartment was off the market. Cave’s memory obviously isn’t what it used to be (he did a lengthy face-to-face interview while I was reporting my book on the building), but never mind that. I’m glad to hear Sale (above with her late husband, Steve Ross of Time-Warner) is still thinking about selling the apartment she was never selling and then reaffirmed her desire to not sell. And I still hope for a small crumb of commission from Cave for raising resale values in the building. It’s tough out there for billion-heiress widows, but even tougher for journalist-authors.
UPDATE: This must be crack to crack real estate reporter Abelson. He’s not letting go!