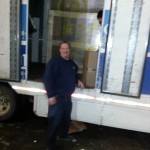 The Real Deal reports that in 2013, Fifteen Central Park West remained the city’s most valuable apartment building with eight sales there last year bringing in an average $5,636 per square foot. Meantime, move-ins have begun (see photo, at right) at the nearby (but still unfinished) One57, which developer Extell promotes as Manhattan’s next heavyweight condo. That happy moving man at right made the equally dubious claim that his client was Leonardo DiCaprio.