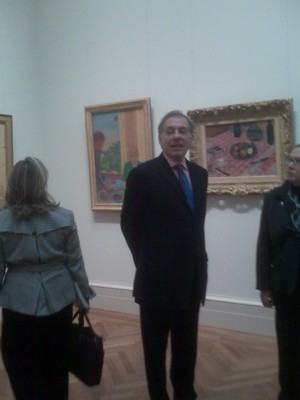 Now that the art museum world has had a chance to digest the news that dark horse Thomas Campbell will be the new director of the Metropolitan Museum of Art, speculation is beginning to bubble up through the curatorial ranks about the possible after-shocks of the surprise choice made by the museum’s Board of Trustees. Specifically, wags now wonder whether either or both of the other two alleged in-house aspirants for the job, the Met’s curator of 19th-Century, Modern and Contemporary art, Gary Tinterow (above), and the chairman of the department of European sculpture and decorative arts (and until now, Campbell’s boss), Ian Wardropper, will take Campbell’s ascension as an exit cue. Though the Solomon R. Guggenheim Foundation recently filled its empty directorship, plum posts remain open at the Philadelphia Museum of Art, the Hirshhorn Museum and Sculpture Garden in Washington, D.C., Pittsburgh’s Carnegie Museum of Art (whose boss Richard Armstrong was the Gugg’s choice) as well as the Kimbell Museum, the Seattle Art Museum and others in Boise, Colorado Springs, Houston, and nearby Montclair, N.J. A list of open top museum jobs is here. Tinterow famously enrolled in the Center for Curatorial Leadership, Agnes Gund‘s boot camp for future museum poobahs. But one director I’ve spoken to bets Wardropper goes first, asking, “If you were technically Campbell’s supervisor, how would you feel about being leap-frogged to the sedes sapientiae?” That’s the Seat of Wisdom for those lacking in Latin.