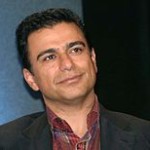 Reuters reports that Iranian-American Omid Kordestani, an early Google executive, is moving to Twitter as its new executive chairman. Kordestani and wife Gisel own a duplex on the 16th and 17th floors of Fifteen Central Park West, between hedge hog Barry Rosenstein of Jana Partners and wife Lizann and Sting and wife Trudie Styler. Lloyd Blankfein of Goldman Sachs lives with wife Laura on Rosenstein’s other side, making the floor a trick-or-treater’s delight.