Airport guy seeks to fly from 15CPW with $4.6 million profit 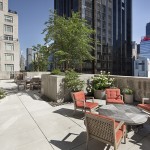 One frustration in writing House of Outrageous Fortune was that it had too many wealthy apartment owners, and to make a readable book, I couldn’t name them all. Here’s an opportunity to name-check two of the missing. In what appears to be the first attempt to sell a Fifteen Central Park West apartment for the fourth time, Fernando Chico Pardo, Chairman of the Board of Grupo Aeroportuario del Sureste, which operates airports in Southeast Mexico, has listed apartment 9G in the rear of 15’s tower for $17 million. He bought it for $12.4 million early in 2011, and subsequently rented it out. Its original owner, John Ridley, wrote the screenplay for 12 Years A Slave. Owner #2 is a mystery. Pardo owns the apartment through NAPS Holding Inc. According to listing broker Kyle Blackmon, who holds the record for selling Manhattan’s most expensive apartment, the $88 MILLION Sandy Weill/Dmitry Rybolovlev penthouse at 15CPW, Pardo’s 3-bedroom pad boasts the building’s third largest terrace at a patriotic 1,776 square feet (at right).