An Open Letter to Ann Coulter 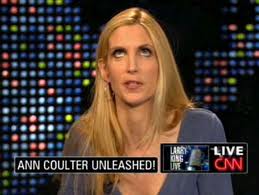 Dear Ann Coulter,
Your web site doesn’t offer a way to contact you; mine does. That’s why I’m writing you this way. You made a whopping big (though seemingly small) mistake in your column yesterday and I’m paying for it and I’m disgusted and so I am writing to ask you to help me stop the wave of sewage you’ve caused to wash up in my in-box. Your mistake was one that no one with a byline should make. You wrote a column about a guy who wrote an article in Vanity Fair this month on Sarah Palin. His name is Michael Joseph Gross. That’s Michael Joseph Gross. Not Michael Gross. That’s me. And your mistake has been compounded by the right-wing-nuts who read your column, and before that, by others whose reading skills apparently ain’t that great. So all month, I’ve been getting hate mail meant for Michael Joseph Gross. Normally that would amuse me. But the potty-mouthed, hate-spewing types you seem to inspire don’t. So I want to take this opportunity to ask you to please post a clarification, explaining in nice clear simple words to your flock that Michael Gross and Michael Joseph Gross are two different people. And to those who wonder why I’m doing this, here are some of the notes I’ve gotten (along with the names and email addresses of those who sent them). I wish you all the in-box peace you have denied me these last few weeks. For all those who dislike hate and foul language, stop reading here, please.

This one is from Sheila Lee (aug77@cox.net): “if you are the so called writer for vanity fair,this one’s for you! were you in Sarah’s bedroom,did you see whether her busband had sex with her… who are your so-called un-named sources and how many of them might have been peering through Sara’s bedroom windows… you’re peeping tom article is typical low life,new york jew smear… yes i am an anti semite,and those like you make my feelings all the clearer as to why”

Next up is Michael Emley (maemley@comcast.net): “Just wanted you to know that she could kick your ass… with one hand tied behind her back. Sad day in manhood… you pussy. Those terrorists use guys like you in place of sheep. I wish it weren’t true..I know guys like you can’t hardly wait.”

Here’s a particularly charming and colorful screed from a couple who bill themselves as Judy & Chuck (malhouse5@enter.net): “Hey Gross… Give me a break . You , wanted to write a positive piece on Palin ? Couldn’t find nice uplifting things to write about her ? Please ! You go on MS… DNC and spout your typical Left wing Trash . So she told a little white lie about her experinces about Handicapped Children . SHE DID NOT ABORT HER OWN CHILD DID SHE ? DID SHE ?. A LIB LIKE YOU WOULD HAVE TOLD YOUR GIRLFRIEND TO STICK A COATHANGER UP HER VAGINA IN A DIRTY ALLY WAY. PALIN LIES ALL THE TIME ? HOW BOUT OBAMA’S LIES AND CLINTON’S LIES . OBAMA RAN AS A MODERATE, and LIED JUST TO GET IN THE WHITE HOUSE> HILLARY NEVER LIED ABOUT ALL HER PERSONAL ESCAPADES INVOLVING HER HUSBAND ???? FORGET ABOUT YOUR ARTICLE BOUT PALIN . NO ONE IS GONNA GIVE YOU ANY CREDIBILY ABOUT YOUR SELECTIVE DISGUST FOR A CONSERVATIVE WHILE YOU PUT OBAMA ON A PEDISTAL WHO NEVER LIES , RIGHT ? YOU LEFTIES , OBSESSED WITH PALIN , TRYING TO DESTROY HER , .CRITICIZING HER FOR MAKING MONEY? LAST TIME I CHECKED OBAMA MADE 5 MILLION THIS YEAR ? NO OUTRAGE FROM LEFTIES LIKE YOU . PACK OF SELECTIVE HYPOCRITS ! YOU WANTED TO WRITE A POSITIVE PEACE ? DON’T MAKE ME VOMIT ! hell will freeze over before she gives lefties like you a sit down with her . why should she .?..she does not need vermin like you and your ilk ! look at the people you hang around with … huffington, new yorker, vanity fair , GQ, new york times, aLL LIBERAL LEFT WING RAGS WITH libs LIKE INSECTS . I LOVE YOU LIBS NEW WORD … progressive !!!! what a joke !… you’RE A lib … A LIB , A LIB . iT’S AS MUCH OF AN UGLY WORD AS THE N WORD. i GUESS IT’S WHY YOU LIBS ARE ASHAMED OF IT AND USE THE PHONY WORD … progressive!”

And finally (for now, at least), a man who signed himself mIKE bOILEAU (boileau.mike@gmail.com): “You are one fucked-up piece of shit. I just read Ann Coulter’s article about your Vanity Fair Article and have have to say, she hit it bang on. You are a real, gooy-gash piece of garbage. You need to find something else to criticize Sarah Palin about. Something thaT HAS SIGNIFICANCE REGARDING THE LIVES OF THE aMERICAN pEOPLE, NOT THE RETARDS WHO STRUGGLE TO READ VANITY fAIR.”

Y’all confirm my faith in American goodness, fairness and rationality. So please, Ann, can you do something to keep them out of my in-box?