Bad decor but a great address 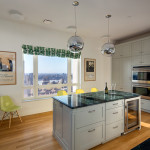 Curbed just found another new eight-figure listing at Fifteen Central Park West. The décor is underwhelming, but the space is, well, outrageous. Though I’m not sure I would want to bunk directly underneath Dan and Margaret Loeb, someone will surely want that position. Curbed asked me why several 15CPW units have come onto the market. Which is interesting, given that units are reportedly languishing at the nearby Blue Penis (One57), even as flipping there continues, no one is talking much about sales at 220 or 432 or Nordstrom or the Economist tower or 520 Park. I wouldn’t be at all surprised if that’s because investors are worried about a looming oversupply of eight figure apartments. And who knows what new ideas Bill De Blasio is cooking up for taxing their owners. Is the condomania kicked off by sponsor sales at 15CPW over? Do the myriad troubles in Russia and China mean their flight-capital nationals are no longer coming to NYC to roost? 15CPW investors (as opposed to owners) may be thinking this is the moment to cash out–when they can still get 3X the initial offering price. Not a bad return on investment.