Bob Diamond: Out of 15CPW, into Africa 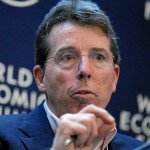 Robert Diamond, the former head of Barclay’s, ousted due to the LIBOR rate-fixing scandal, licks his wounds in a penthouse at Fifteen Central Park West, as first revealed by this writer in Newsweek last January, but according to a Reuters story today, he’s hungering for a comeback….in African banking. “He has made no secret of his plans to invest in Africa, the location for much of his family foundation’s work and a continent considered ripe for strong banking growth because much of the population does not have access to banking services,” the story says, adding, “Diamond could be required to appear as a witness in April in a London court case relating to the alleged manipulation of Libor, in which Barclays is being sued for alleged mis-selling of products based on the benchmark interest rate.” The photo of Diamond in January 2012 is Copyright by World Economic Forum. swiss-image.ch/Photo by Moritz Hager