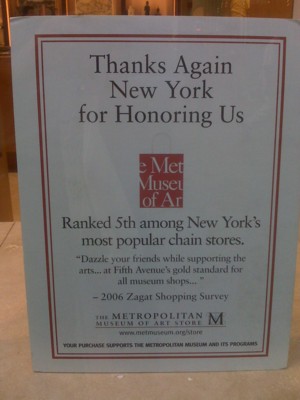 No one wants to see a store close — any store, especially a book store, and especially now — but there may be an element of karma in yesterday’s announcement of the closing of almost a third of the Metropolitan Museum of Art’s two dozen retail stores. For the last several years, the Met’s stores have repeatedly banned books — n.b.: my recent 740 Park among them — for sins real and imagined against the museum and favored donors and benefactors. The very wealthy museum has experienced periodic contractions before (a subject dealt with at great length in my forthcoming unauthorized biography of the Met, Rogues’ Gallery, which, in the spirit of full disclosure it should be said is unlikely to be sold at the museum). And compared to those earlier times, when the museum was forced to close whole galleries, shed staff and sometimes even curtail its opening hours and shut its doors some days, yesterday’s decision was hardly Draconian. Still, Gripebox mourns for those satellite stores and fervently wishes for better times for all of us — including the marvelous Metropolitan Museum .