Buy This Book (and it’s not one of mine) 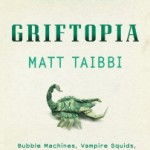 Matt Taibbi‘s upcoming bookÂ Griftopia is excerpted in the new issue of the ever-better New York Observer. Â Here’s an excerpt of their excerpt, in which he discusses the reaction to his Rolling Stone story likening Goldman Sachs to a vampire squid: Â “As interesting as the actual material in the original piece was what happened after we ran it… My initial reaction to being blasted in the media … Â was that this was just typical media turf-war stuff: a bunch of insiders angrily piling on someone who didn’t have any background in their area of expertise (which I definitely did not) and yet was not-so-subtly indicting them for falling asleep on the job.Â That was definitely part of the story… But when the uproar continued for more than a month — an eternity in news-cycle time — it was clear that there was something else at work. Looking back now, what I experienced in the wake of the Goldman piece was a lesson in a very subtle truth about class politics in this country.Â You can pick on the rich in an ironic,Â Arrested Development sort of way, you can muss Donald Trump‘s hair; you can even talk abstractly about class economics using clinical terms like ‘income disparity.’ But in our media, you’re just not allowed to kick the rich in the balls. The taboo isn’t so much the subject matter; the taboo is the tone. You’re allowed to grimace and shake your head at their shenanigans, but you can’t call them cheap crooks and imply that they aren’t somehow better or smarter than everyone else, at least not until they’ve been indicted or gone bankrupt.”

Buy this book. Â I know I plan to.