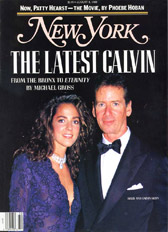 And now comes the news that the owners of Calvin Klein, the brand, are closing its high-end collection business following the departure of designer Raf Simons, who failed to be its savior.  Calvin Klein, the man, lives on, both in the world and in my archives, thanks to my second-ever cover story for New York Magazine. It appeared in summer 1988, shortly after Calvin reappeared in New York to launch his scent Eternity following a much-publicized stint in drug rehab. Fun fact:  When I started reporting the story, the company pulled its advertising from New York, and didn’t return to the magazine’s pages for five years.  You can read about the highs and lows of the designer and his brand in their glory years here.