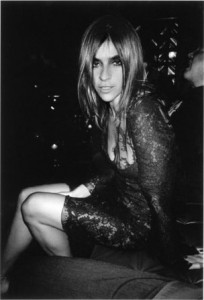 Yesterday’s Daily Beast dissection of the brilliant Carine Roitfeld’s departure from French Vogue, where she has been redacteur-en-chef for a decade, includes this line by Jake Bernstein: Â “There have also been complaints about the lucrative work she has booked as a stylist doing ad campaigns — work she continued to accept long past the time she was made editor of French Vogue.” But in today’s local community newspaper, Cathy Horyn asserts, “Ms. Roitfeld was not free at French Vogue to take outside styling projects.”

It doesn’t take a degree in fashion to know that both of these statements cannot be true (and I’ll venture the educated guess that Jake’s version is the truer one). Â But fashion and truth are, I propose, mutually exclusive. Or, as George Orwell put it in 1984, “To know and not to know, to be conscious of complete truthfulness while telling carefully constructed lies, to hold simultaneously two opinions which cancelled out, knowing them to be contradictory and believing in both of them, to use logic against logic, to repudiate morality while laying claim to it… to forget, whatever it was necessary to forget, then to draw it back into memory again at the moment when it was needed, and then promptly to forget it again, and above all, to apply the same process to the process itself — that was the ultimate subtlety; consciously to induce unconsciousness, and then, once again, to become unconscious of the act of hypnosis you had just performed. Even to understand the word ‘doublethink’ involved the use of doublethink.”