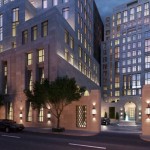 If I was Arthur or Will Zeckendorf, I’d want to sue somebody. In the run-up to the publication of House of Outrageous Fortune, I saw but didn’t dwell on a scoop on curbed.com revealing renderings of Fifteen Central Park West architect Robert A.M. Stern’s design for competing developer Vornado’s new 220 Central Park South condominium, just a block and a bit away. (The renderings have since vanished from the web site of Australia’s Sunlab Architecture , but they’re archived on curbed and sampled at right and below). Stern’s hiring for that project was first revealed on Gripepad two years ago this week. Now, a knowledgeable source tells me that Fifteen’s developers were livid that Stern had offered up another two-structure apartment house with a low front building and a tower behind (like 15), a motor courtyard entered from a side street (like 15’s), another reflecting pool and round fountain (yep, 15 has one of each), and 220 is clad in limestone, too. Even if imitation is the sincerest form of flattery, this vision of 220 CPS could be easily nicknamed the House of Outrageous Plagiarism. Neither Arthur nor Will Zeckendorf would comment on the record, but a source at Zeckendorf Development says they’ve been told that Vornado used images based on 15CPW while seeking financing for its building, and that the final design will be “totally different.” Asked for comment, Stern’s spokesman responded, “I know what we’re saying: The leaked renderings do not represent the design as it’s developing.” Pressed to clarify, he continued, “You’re trying to get me to say more than I can say.” He did add that Stern’s role at 220CPS might be in flux, too. “Another firm might be involved, but not in the architecture.” He also said, “Ask Vornado.” But Vornado’s spokeswoman declined to comment. 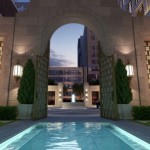 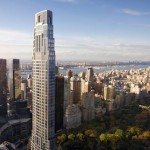