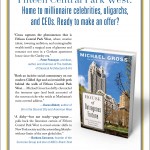 The Confidential column in the Daily News claimed on Monday that Alex “A-Rod” Rodriguez is seeking to return to Fifteen Central Park West, where he once rented half of what is now a mammoth combined apartment that has been languishing on the market since 2010–an uncommon failure at the posh condo–at prices ranging from $95 million down to the current ask of $65 million. A bargain (though perhaps not for green hamburger)! It is unclear if Rodriguez wants to rent or buy owner Leroy Schecter‘s thus-far unwanted, unloved spread or another but, the News reports, the condo’s board doesn’t want him back, anyway, allegedly due to behavior briefly chronicled in House of Outrageous Fortune, mostly involving what were once quaintly called ladies of the night. Not to be churlish, but the news media’s focus on A-Rod and his hookers is just a sideshow compared to the book’s accounts of real estate wheeling and dealing in New York, and its inside look at one of Fifteen’s developers, the Goldman Sachs investment bank. Better, I guess, to look down in the gutter than straight ahead at the behavior of those who really rule our world.