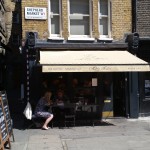 While reporting “Who Rules the Night?” for the new issue of Departures, I took one lunch off to try the most highly-touted new restaurant in Mayfair. If Richard Caring and Jeremy King, the protagonists of the Departures piece, are London’s restaurant Goliaths, the owners of Kitty Fisher’s are the local dining scene’s Davids. Occupying the ground and basement floors of a tiny house on Shepherd Market square in Mayfair, the minimally-decorated Kitty Fisher’s opened late last year to such instant acclaim, its phone robot told callers reservations would only be accepted eight hours each week, and only for lunch, never dinner. Chef Tomos Parry’s Basque-flavored modern British cooking was so good, the ten tables inside (there are two more outside under the parchment colored awning when the weather is good) were always filled, and one newspaper reviewer used its success as a club to knock Andre Balazs’ celebrity hangout Chiltern Firehouse off its perch as the city’s hardest-to-book table.

The restaurant was named for a legendary 18th Century courtesan, and the bar is lit by red lights in her honor. But the heat comes from Parry’s wood grill in the open kitchen on the lower level, and the spotlight is on the food even though it has attracted diners from the PM on down the British pecking order.

One day in July, co-owner (and former Coronation star) Oliver Milburn’s hands were shaking as he juggled two phones, and a thick reservation book. Unlike Caring and King, his dress was strictly casual—jeans and a T-shirt—and he was unshaven. He had reasons to be both tired and cheerful. He and fellow owner Tom Mullion, an actor-trader hyphenate, only realized what they’d done when they served their very first meal to the workers who built the place “and saw people’s reactions to Tomos’ food,” Milburn says. They couldn’t afford a spare hand to take bookings, which created the situation that had brought someone named RubenDaHawk to tweet that very morning, “It’s hopeless to call you.” So, says Milburn, “I’ve been answering the phone all day. We were caught slightly unaware. We don’t feel hyped yet, but objectively, I suppose we are.”

Milburn cites Jeremy King as an inspiration. “Our intention was a delightfully idiosyncratic neighborhood restaurant,” he continues. “Not ‘whooo, look at us,’ but good-natured, easy-going, relaxed.” In succeeding, they insured their start-up would be “all-consuming,” he continues. “There’s been no time for reflection. But it’s not a burden. It means you have to be on your mettle. Delivering on very high expectations is a very exciting way of working hard.”