Dinner and A Show 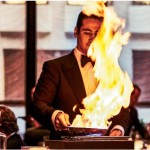 Departures Magazine has unlocked my recent story about dining at The Grill in the Seagram Building, the much-touted restaurant that replaced The Grill Room of The Four Seasons in that location earlier this year. The new restaurant was created at the behest of developer Aby Rosen, the New York character I’d previously profiled in “The Rise, Fall and Rose of Aby Rosen” in Centurion, the Departures offshoot for American Express Black Card holders. Meantime, the restaurateurs behind The Four Seasons, Julian Niccolini and Alex von Bidder, say they expect to re-open in their new location at 280 Park Avenue in the spring.