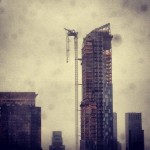 Extell’s Gary Barnett, developer of the supertall condo called One57, is the subject of a big feature in this week’s Bloomberg BusinessWeek. It’s my favorite magazine. And I’m happy that writer Devin Leonard quoted from my House of Outrageous Fortune in his piece, and implies (albeit indirectly) that the book’s subject, the condominium at 15 Central Park West, was the inspiration for Barnett’s erection on West 57th Street. But the profile (which I’d been looking forward to reading since Leonard interviewed me some months back), left me disappointed. I don’t fault BBW on the facts (though it calls Alex Rodriguez, 15CPW’s most controversial renter, an apartment owner), but rather, on the nuances. Here are some nits I can’t help picking:
–The story calls Barnett an “arbiter” of luxe real estate in New York City. But an arbiter is one whose taste is so good it’s authoritative. The only reviewers who have dared chime in on (big advertiser) Barnett’s taste have expressed a somewhat different opinion. Justin Davidson of New York magazine called One57 “a genuine clunker,” “tall and clunky, preening yet graceless,” asking, “Shouldn’t architects who reach for physical heights be extending themselves creatively, too?” The same can be said of developers. Similarly, Paul Goldberger of Vanity Fair deemed One57 “ordinary” and “garish” and compared it to “a tall refugee from Las Vegas.” Where have you gone, Ward McAllister?
–Reporting on sales in the building, the story quotes a real estate expert who says that One57 “looks like the most successful condominium in New York.” Which (arguably) appeared to be true when One57 was the new kid on the block and there was little high-end competition. But just a few days ago, the same company’s Bloomberg News reported sales in the tower had slowed markedly, once newer buildings like 432 Park and 50 UN Plaza began competing with it, and the One57 condo units with helicopter views were all in contract. Gripepad reported something similar last year, “with most of the 30% of unsold units in the middle floors of the building, where park views are blocked by the landmark Essex House tower.” And if BBW’s numbers are right, One57 still hasn’t made as much in sponsor sales as 15CPW did. In fact, by my back-of-the-envelope figuring, it’s lagging by about half a billion dollars.
–As it should, and as he deserves, BBW extols Barnett’s skills as a dealmaker. But as the epigraph of House of Outrageous Fortune—a quote from the late architecture critic Ada Louise Huxtable about the social impact and responsibility of architecture–points out, the development of buildings that will be part of the urban fabric for years is about more than the art of the deal.
–Finally, though it makes much of some of Barnett’s stumbles (the shadow cast by this building, the “poor door” controversy at another Extell development), BBW has forgotten or chosen to ignore the fact that while putting up One57, Barnett’s construction teams twice forced neighbors living around it to be evacuated from their homes. Adding insult to injury, they will likely have to look at that monstrosity for the rest of their lives.