Focus: The truth about Terry Richardson 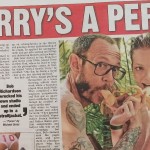 Sixteen months ago,the New York Post took readers “Inside the twisted, sexed-up childhood of Terry Richardson” in an exclusive first look inside the pages of Focus: The Secret, Sexy, Sometimes Sordid World of Fashion Photographers. It tells some of the story of Terry Richardson‘s late dad, Bob, and one of fashion photography’s greatest and most messed-up practitioners. Mail Online picked up the Post story and added even more of the sometimes sordid details from Focus. Yesterday, it was revealed that In the wake of the Harvey Weinstein scandal, Condé Nast had banned the Hearst-contract photographer, apparently grabbing the caboose of the #metoo train. FOCUS wasn’t the first revelation of Richardson’s reign of terror, but it remains the most complete account of his behavior and its historical precedents in fashion.