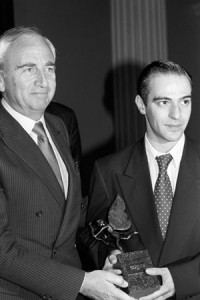 Back in 1987, some of the, er, older folks at the New York Times were infuriated when I profiled John Galliano on the cover of what was then called the Living section, asking why a nobody was so anointed. Eerily, in light of recent events, the story opens where I met Galliano in 1985, at a late-night party in the then-downtrodden Notting Hill section of London where we all indulged in more than a bit of drinking. If you don’t mind loading a pdf file, you can read it here. The image is of Galliano receiving the British Designer of the Year award in ’87.
UPDATE: Galliano’s statement on the affair is here.