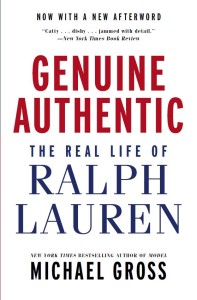 Today, the Daily Mail Online revealed that Genuine Authentic: The Real Life of Ralph Lauren, my “sizzling” 2003 unauthorized biography of the American fashion legend, is being re-released on July 24 as both a re-packaged paperback and a first-ever e-book by William Morrow Paperbacks.

It’s the same book that a New York Times reviewer called “sharp-clawed [yet…] honestly admiring,” but it’s been updated with a new Afterword.  In the original, “Gross summed up Lauren by saying that the things which made him a success like obsessiveness and control were ‘negative when viewed on the human level,'” the Mail reports.  “In the new afterword Gross strikes a more conciliatory tone and says … that while others in the fashion business got rich, nobody approached Lauren’s ‘fame, wealth, or position of influence’. ”

You can pre-order the new edition from Barnes & Noble or Amazon by clicking the respective links.