In re: Dominick Dunne 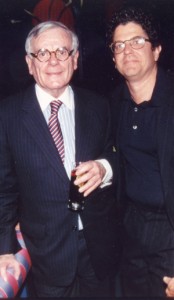 UPDATE: Dominick Dunne died peacefully Wednesday at his home here in New York after a two year battle with bladder cancer, reports David Patrick Columbia‘s New York Social Diary. “F. Scott Fitzgerald famously wrote that ‘there are no Second Acts in American lives.'” DPC says. “Dominick Dunne, who most assuredly was a admirer of Fitzgerald’s work, has been the prime example of disproving that idea. Fitzgerald would have been astonished too.”