In Tisch We Trust 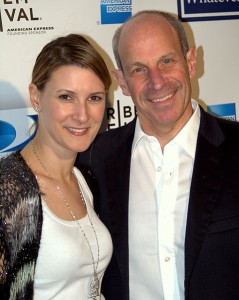 Jonathan M. Tisch, the chairman and CEO of Loews Hotels, and his wife Lizzie (above) today announced a $10 million gift to the Metropolitan Museum of Art to build the latest new, improved gallery for its Costume Institute, the pet charity of New York’s garment business since the 1940s. Unmentioned in the press … er… report in this morning’s paper is the subtext of a $10 million gift to the museum: It typically buys a seat on the board, as it did not long back when the controversial libertarian mogul David Koch landed a seat with a same-sized donation. So it’s reasonable to expect one of the Tisches to join him come September when the latest class of trustees is elected. This is also a family affair for the Met, which already has a Tisch Gallery, underwritten with a $10 million gift from Tisch’s late uncle Larry and his late father Preston Robert Tisch. Larry was once a controversial figure on the Met’s board and young Tisch himself played a cameo role in the museum’s recent history when the $3 million dinner that followed his first wedding to Saul Steinberg‘s daughter Laura became a signal moment in the brief bright saga of Nouvelle Society. Unlike his notably irascible uncle, Jon Tisch is also a nice guy. The whole stunning story of the Costume Institute is told in Rogues’ Gallery.