It’s a Dirty Job But Someone Has to Do It 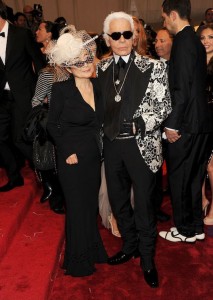 This gripepad and pen are familiar with the ins and outs of telling the emperor he’s starkers. But at a certain point, it can get repetitive, so I’ve mostly spared the Metropolitan Museum in recent months. I almost felt bad when Obama-Gets-Osama kept Anna Wintour‘s fashion promo party from dominating the news cycle this week. But the blog Scallywag & Vagabond has written about the Party of Last Monday in a very entertaining way. Suffice to say the post is called “Jerking off with the Metropolitan Museum Gala Propaganda Committee.” NSFW, kids! The image of Yoko and Karl is from racked.com‘s extensive wardrobe coverage. Christopher London has more on the ball here. He calls his post “Let Them Eat Cake.”