It’s good to be the director 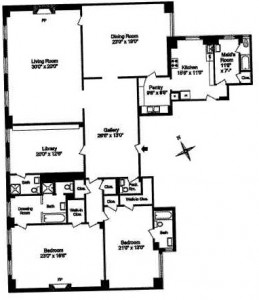 Gripebox first revealed Metropolitan Museum director Thomas Campbell‘s $4 million Fifth Avenue apartment — and some of the peculiarities of his living arrangements — here back in March. That’s not it above, but the floorplan shows the same apartment one floor above Campbell’s. Today’s New York Times reveals that though Campbell receives free housing across the street from his museum office, he pays no income tax on a perk that’s got to be worth a tidy six-figure sum annually. As so often happens when it deals with the Met, the local community newspaper went easy on Campbell, covering his situation in two very brief paragraphs, while serving up seven paragraphs on the similar housing perk given to Ellen Futter, director of the American Museum of Natural History (which has not had the sense to put multiple Sulzbergers on its board of trustees). Too bad. The history of the Met’s housing benefit and who has benefitted from it is, to say the least, titillating. Thomas Hoving, for instance, refused it, preferring not to live (metaphorically speaking) above the store. There’s lots more of what the Times didn’t tell you in Rogues’ Gallery. Click the link to the left to buy a copy.