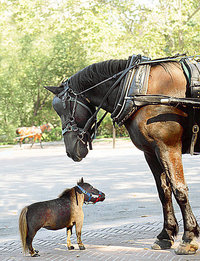 Could a real-estate grab by a parking lot mogul be the hidden agenda behind the latest development in the campaign against Central Park’s beloved carriage horses? I would never question the motives of animal activists, even though I disagree with some of their goals and tactics. But a document that landed in my in-box last night makes me wonder if those wailing about the allegedly mistreated horses aren’t in fact unknowing dupes of rich and powerful real estate interests — specifically Edison Properties, a real estate development and management company based in Newark, New Jersey, though its businesses operate in Manhattan. Two of those businesses — Manhattan Mini-Storage and Edison ParkFast — have multiple locations in the same Far West Midtown neighborhood as the stables where the Central Park horses are housed. It appears they are anything but good neighbors.

It turns out that the prime mover behind the latest anti-horse gambit — the proposal that they be replaced by cheesey electric-powered faux Model Ts (that don’t even exist but if they did would be far better suited to a theme park in Orlando than to midtown Manhattan) — is Steve Nislick, chief executive officer of Edison. His connections to local politics are deep, and his company, according to New York City’s web site, employs legions of lobbyists to influence city decisions on real estate and zoning in its favor. So what? Nislick revealed his real (estate) agenda late last year when he produced and signed a brochure touting the Model-T plan — the same brochure a carriage-horse-lover sent to me last night. In it, Nislick shows his hand when he discusses those five stables where the horses are housed, all sitting between 10th Avenue and the West Side Highway in midtown, the same neighborhood where Edison operates many of its parking lots and storage warehouses. In a curious twist for a parking lot mogul, Nislick paints his proposal as “a green transportation alternative.” But my guess is that the green light in his eyes may be money not ecology. Why? The answer lies on page five of that brochure, which promises “a windfall for the carriage industry from the sale of its multi-million-dollar stables alone,” Nislick writes, before getting to his real point. “Currently, the stables consist of 64,000 square feet of valuable real estate on lots that could accomodate up to 150,000 square feet of development. These lots could be sold for new development.” What are the odds that good neighbor Nislick, the out-of-state real estate developer, simply covets those valuable, underdeveloped New York lots — and has teamed up with ambitious pols to use the emotions of animal rights activists as fuel for their own agendas? One man’s opinion? The City Council should Just Say Neigh to this Newark-bred land-grab-in-the-making and consider the real green and revenue-enhancing alternative of controlling the traffic chaos on Central Park South, instead.
Photo from amNY.