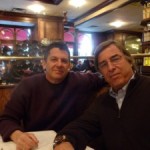 John Casablancas, 70, the agent who invented the modern fashion modeling business at Elite Models in the 1970s, died last night after a long, courageous bout with cancer, in Brazil where he lived with his second wife and their family. “He was the most magical man in this business; definitely a prince,” says photographer Jacques Silberstein, who called to tell me the news. One of the protagonists of Model, a book he alternately loathed and grudgingly admired, Casablancas was as compelling as he was controversial, and epitomized the words living large. (The photo of Casablancas and me was taken by Harvey Tanton in January 2009 at lunch at Rue 57 in Manhattan.) CORRECTION: Initially, this post gave Casablancas’ age at death as 71. He was 70, as now noted. UPDATE: Obituaries appear in the Monday July 22 issues of the Los Angeles Times and WWD. England’s Telegraph cites Model in its obituary today, too.