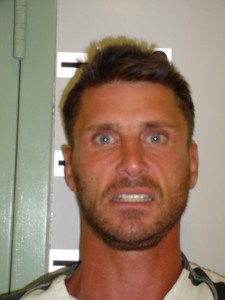 Justin Force Lazard has been arrested and as of last Saturday was being held at Riker’s Island pending extradition to California. The son of ABC foreign correspondent Sidney Lazard and allegedly a descendant of the founder of the Lazard Frères investment bank, the former actor and Calvin Klein model failed to show up for his trial after he was arrested and had his mug shot (above) taken on July 4, 2006 for allegedly “exposing himself in front of numerous witnesses who were attending a public fireworks display at Library Park,” in Lakeport, California, the Lake County News reported last week. Lazard, the paper continued, “reportedly struggled with officers, who used Tasers to subdue him. Last May he was scheduled to go to trial on misdemeanor charges of annoying or molesting a child under 18, engaging in lewd conduct in public and indecent exposure. However, he failed to appear and the Lake County Superior Court issued a bench warrant for Lazard’s arrest, according to court records.” Named Lakeport’s “most wanted” criminal, he was apprehended at U.S. Customs as he returned to New York from the Caribbean. Making the tawdry case much stranger, the blog Law Shucks revealed last year “that the park now has a plaque that reads as follows: ‘This playground is dedicated to the children of Lakeport, CA, Creating Childhood Memories. Donate[d] by Justin Lazard 2008.'” The plaque was apparently later removed.

Lazard has been in the news before, most recently in 2008 when Page Six said he was suing the Dominican Republic hotel where he married “Project Runway” contestant Shannon Fluet, claiming she was manhandled by the manager, then beaten by a security guard. He also made a cameo in my 1998 story “From Russia With Sex,” as an ex-boyfriend of the Latvian model and tabloid scandal star, Ines Misan. “After a long romance and a brief engagement [to Lazard],” I wrote, “Misan returned to New York in 1995. But she kept her Lazard connection, moving in with Justin’s parents and holding on to his checks and one of his credit cards, which she used to pay her rent and buy a VCR.”

“Be fair, it was a misdemeanor,” says a former friend. “If it were serious they could have charged him with a felony. The serious thing is his arrogance and stupidity for not showing up.” What about the original allegations of, er, creating some yucky childhood memories? “He suffers from the OJ thing, clinical narcissism coupled with sociopathy,” the friend opines.

Your reward for reading this far? Lazard in a Calvin Klein commericial: