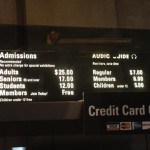 Forty-plus years after the Metropolitan Museum of Art instituted its Pay What You Want But You Must Pay Something admission policy, it has finally been formalized by the city of New York, which has amended the museum’s lease to allow it. And so, one of the museum board’s long-standing misstatements (the lease was already amended it long claimed, and then when it emerged that it hadn’t been, well, huff, puff, it didn’t need to be), has been miraculously wiped away. Rather like the way the magical museum has traditionally laundered reputations and ill-gotten gains through the alchemy of cultural philanthropy. A long way of saying, congratulations (both to the museum and to the New York Post, which led the reporting of the story and likely inspired the lease change)! Candor is its own reward. Read Rogues’ Gallery to discover the many ways truth is mutable (and art is awesome) at 1000 Fifth Avenue.