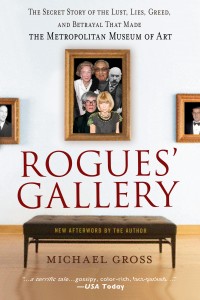 A longstanding mystery about the Metropolitan Museum of Art’s much-debated pay-what-you-wish-but-you-must-pay-something admission policy is solved at last in an understated story on the fracas on the front page of today’s New York Times The Arts section. First reported in the New York Post, the mystery hinges on whether New York City ever formally approved “recommended” admission charges at the Met and other cultural institutions that occupy city-owned land and buildings. In the story, Sarah Lyall reveals that although an agreement was reached in 1970 between museum director Thomas Hoving and Parks Commissioner August Heckscher, the Met’s lease was never amended to reflect their conversations. “The museum says no amendment was needed,” Lyall writes. Of course, as both Hoving and Heckscher are both dead, their feelings and intentions regarding formalizing their conversations will never be known. But Hoving’s version of the story, and a full account of the museum’s controversial admission policies, which went far beyond the fee charged today–and reflect the conflict of the 1% vs the 99% that still colors (and some say taints) the museum’s operations–are told in my book on the Met’s board and backers, Rogues’ Gallery: The Secret History of the Moguls and the Money That Made the Metropolitan Museum.