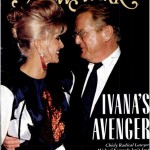 Michael Kennedy, a prominent radical lawyer of the Sixties who became a noted Manhattan social figure in the Nineties, died on January 25th at Memorial Sloan-Kettering Cancer Center at age 78. Kennedy was active to the end, and was last spotted by Gripepad at a screening of The Revenant just before Christmas. New York Magazine has remembered “Ivana’s Avenger,” my 1991 cover profile of Kennedy, a story reported and written without his cooperation in the midst of his highest profile case, representing Ivana Trump in her divorce from current presidential candidate Donald Trump.