Modeling: Reality compared to what? 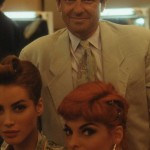 Last week, the Telegraph in the United Kingdom ran a story, “Debts, £300 salaries and career instability: the reality of modelling today,” that read like an obituary for the posing trade. “Few girls make it big these days, and fewer still have the backing to convert a smash debut into longevity,” the newspaper’s Ellie Pithers wrote. “For while the Kate Mosses and Gisele Bündchens amass millions, and command thousands for a catwalk appearance, most models work long hours with scant job security and earn very little…Increasingly, the most lucrative fashion campaigns and magazine covers are being won by actresses and reality TV personalities such as Gigi Hadid and Kendall Jenner.” But the fact is, fashion is a merry-go-round, not a sprint, “reality”-cum-online personalities have only lately replaced actresses on magazine covers, they and actresses both often lack the particular attributes that show clothes well, and just like long and short skirts, models are only “out” until they are “in” again. True, there is a supermodel deficit these days, compared to the early ’90s, when Christy Turlington and Linda Evangelista (pictured, back then, with this blogger) ruled the catwalk and magazine pages, but that only means it may be past due time for a new generation of six-foot stunners to emerge.