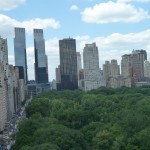 A moving truck is currently idling outside 200 Central Park South. Bernard Spitzer, father of you-know-who, who built the curved modernist apartment house in 1963 in conscious emulation of its catty-corner landmark terracotta neighbor Alwyn Court, is moving into unit 27A at 200 today, a source inside the building says. Spitzer sponsored the building’s 1984 co-op conversion but still owns about twenty percent of it. He’s chosen a $12,750-a-month two-bedroom unit with vast views of Central Park to the north and Times Square to the south. It’s but the latest bit of big news on the new Manhattan Gold Coast, where the star-crossed crane at Extell’s One57 is finally coming down, and three new condo towers are set to rise. There’s more multi-million-dollar action afoot, too, at 15 Central Park West, also out Spitzer’s new window and the focus of this writer’s forthcoming book on the emergence of New York’s new center of financial and residential gravity. Apartment 23D, a three-bedroom in the 15CPW tower, on the market a mere six weeks for $17.8 million, has been snapped up by the owners of the adjoining unit, says a source in the know. The sellers are Jang Kyu Moon and Haeng Eum Han and the buyer is Kevin Sullivan, a Toronto-based television producer. CLARIFICATION: Bernard Spitzer’s new apartment is not at Alwyn Court (which is only 12 stories tall), but at 200 CPS, a fact somewhat obscured by the original punctuation of this item, which has since been corrected.