Mother of Mercy, is this the end of the Rico condo? 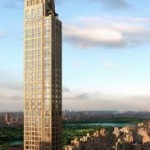 Just as the New York State Senate indicated it is set to consider legislation levying stiff taxes on multi-million-dollar pied-a-terre apartments, the developing brothers, Arthur and Will Zeckendorf, and their starchitect-marketing-marvel Robert A.M. Stern, protagonists of House of Outrageous Fortune, went public with the offering plan for their 15 Central Park West clone, 520 Park Avenue (at right), topped by a triplex penthouse on offer for a staggering, record-setting, epochal, awe-inspiring, gasp-inducing $130 Million. Call it Limestone Yeezus, the Kanye of condos! Needless to say, whoever might consider buying such a deluxe a-party-ment in the sky will likely be able to afford the new tax, too. But The Real Deal reported last night that “some real estate insiders and tax policy experts [are] sounding dire warnings about the chilling impact the [proposed new tax] levy would have on the market.” Is this bad timing, or bad karma? “John Burger, a top broker with Brown Harris Stevens, said if the legislation became law, it could potentially jeopardize Manhattan’s position as the leading international safe haven for blue chip real estate investment” the realty trade reports. “I can’t imagine that given how incredibly profitable foreign investment has been in elevating the Manhattan market to a new historical high that this would be regarded as a wise idea.” New Yorkers who’ve been priced out of their own housing market–as well as Occupy Goldman Sachs types–might disagree.